Along a Storied Trail by Ann H. Gabhart 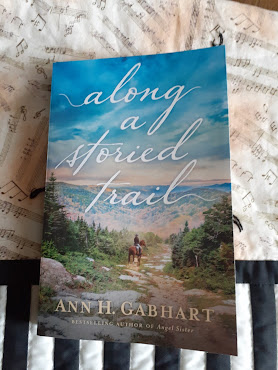 Tansy Calhoun is a packhorse librarian in the eastern Kentucky mountains. During the Great Depression, the U. S. government instituted programs to help people deal with the economic downturn. Packhorse librarians were paid to carry books to people in remote areas. This program didn’t just help the librarians support their families. It also contributed to the education of their “customers.”

As Tansy made her rounds, she got involved in the lives of the people she served. She knew her books and was able to match books and readers well. She had plenty of family, but her father had left home to look for work, and they had not heard from him for months.

Mountain folks were in the habit of taking in people who were down on their luck. It was the Christian thing to do, after all. One of Tansy's customers, Perdita (Perdie) Sweet, a crusty old soul, allowed Cora Lee Embry to live with her after Cora Lee’s father kicked her out of his home. She was pregnant, and her boyfriend deserted her. Then Perdie’s house burned, and Tansy’s family welcomed Perdie and Cora Lee into their home.

In Along a Storied Trail, there’s danger (house fire, thunderstorm, flash flood), romance, and plenty of hill-country wisdom and humor. Tansy has plenty of love interest in Caleb, whom she’s known all her life. But there’s also Damien Felding, a government-sponsored writer who came to the area to write about possible tourist destinations in the mountains and folk stories of the area. Tansy’s younger brother is interested in helping Cora Lee with her dilemma. And Perdie, in her youth, had been interested in Hiram (who married someone else but was now widowed). Hiram is still lives nearby, and there’s love in the air.

The author uses a lot of country sayings in her description and dialog. An example is: “Caleb hadn’t planned to ride over to Tansy’s house until Sunday, but he was too eager to have her in front of his eyes again to wait.” I felt like I was right there with the characters as they dealt with their challenges. This is a great story in which you learn how tough it was for people during the Depression as well as how the government programs affected them.

Learn more about the book and read a sample here. 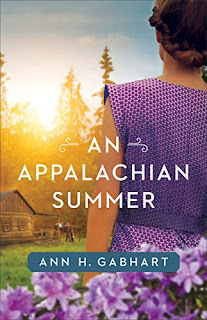 Ann Gabhart outdoes herself in this wonderful story about society women volunteers who spend the summer working with the frontier nursing service in the mountains of Eastern Kentucky in 1933. The stock market crash of 1929 had bankrupted many “society” families. Piper Danson’s family had come through pretty well, but Jamie Russell’s parents had lost everything. Jamie and Piper had been friends since childhood. She had feelings for Jamie, but Piper’s father had “contracted” for her to marry the wealthy Braxton Crandall, a man she hardly knew.

The story starts with Piper’s debut party in Louisville. She had volunteered to spend the summer caring for the horses and being a courier for the frontier nursing service. Mrs. Breckinridge, a society woman herself, sponsored the service. She often visited the cities in Kentucky to recruit workers for the service. From their headquarters in the mountains, the nurses traveled on horseback to meet the medical needs of the mountain residents. They treated injuries, delivered babies, and offered other health services.

There was one doctor at the center, Dr. Jack. Here’s where it gets even more interesting. Piper’s maiden aunt Truda, with whom she was very close, had met Dr. Jack many years ago. She had been impressed with him (and he with her), but they had met only once.

Mrs. Breckenridge had invited Louisville society folks to visit the center to see the operation and consider donations. Piper's at the center doing her volunteer work. Then Braxton shows up. Aunt Truda comes to visit. And---Jamie comes to stay a while to do a story on the nursing service. So---we have the Piper-Jamie-Braxton love triangle and the suggestion that Aunt Truda and Dr. Jack may have had feelings for one another.That's all I'm going to tell you.

I have always admired Ann Gabhart’s ability to make me feel like I’m present in the story. I can almost feel the mountain breeze. I see the rough mountain trails that the nurses and couriers must travel to do their duty. I feel like I’m there with them.

I enjoyed this story so much. Society girls learn the value of simple things, see how the less fortunate live, and enjoy the beauty of the mountains. Will Piper choose Jamie or Braxton? What about Aunt Truda and Dr. Jack? Experience life in the mountains of Eastern Kentucky in the 1930s. Read An Appalachian Summer!

Check out the author bio and author interview (or buy the book) at this link.

The Refuge by Ann H. Gabhart 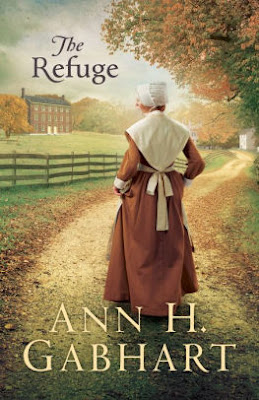 From the back cover: When Darcie and Walter Goodwin hear of a new cholera epidemic sweeping the area, they join the Shakers whose villages seem immune to the disease. It's meant to be a temporary stay, but Walter is killed in a riverboat accident. With no family and no money, Darcie has little choice but to stay with the Shakers. To complicate matters, she is expecting a baby conceived before she and her husband came to the Shaker village. Marital relationships are considered sinful in this celibate community, putting Darcie in a unique--and lonely--position. Can the arrival of widower Flynn Keller and his headstrong daughter offer Darcie the hope of happiness . . . and family?

My review:
Flynn Keller is a widower with a young daughter Leatrice. They live with his father-in-law, Silas, also a widower. Silas makes the mistake of marrying a gold-digging woman he doesn't know very well so that his granddaughter will have a woman's influence. And the men? They need someone to cook for them. The story gets extremely interesting from that point on. Flynn realizes Silas's wife has her sights on Flynn, too. He decides to sleep in the barn to avoid her. Eventually, he takes Leatrice to the Shakers temporarily so that she can learn to read. But this arrangement also gets Leatrice away from the bad female role model.

Ann Gabhart is a master writer, and this book is my favorite so far. I've enjoyed her Shaker books because I have visited Shakertown in central Kentucky and studied Shaker beliefs. Each character has a different reason for being with the Shakers as a resident or visitor. Every one of them comes alive, pulling you into the story so that it's hard to put the book down.

The reader learns a lot about Shaker customs. They would take in anyone in need. But all are expected to conform to the Shaker routine and beliefs. There are several "sisters," as the Shakers call all the women, who have come to Harmony Hill solely because they have no way to take care of themselves.